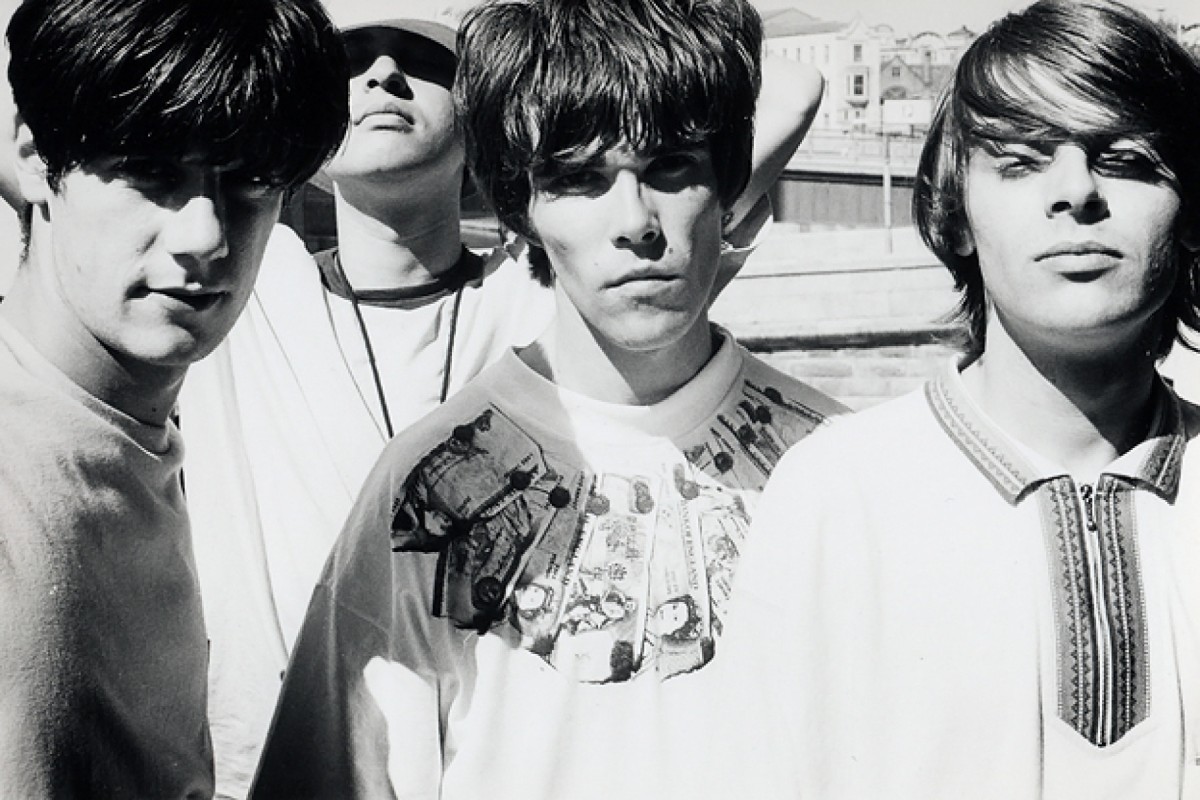 Altrincham, 1980s. In a dark rainy ghost town, two students at a local grammar school start a partnership that’ll last them most of their young adult life. They don’t know it yet, but Ian Brown and John Squire, playing bass and guitar respectively for a Clash-inspired rock band, will later become part of a cultural movement whose effects are still felt today.

The Stone Roses formed in the autumn of 1983 – but it wasn’t until 1987 that they completed their classic and most prominent lineup, with Alan “Reni” Wren on drums and Gary “Mani” Mounfield on bass. In May 1988, the band played a high-profile gig at Manchester’s International II alongside James, to raise funds for a campaign against Clause 28 (among the audience was a 16-year-old Liam Gallagher, who was later inspired to start a band himself). Also in the audience was A&R executive Roddy McKenna, who signed an eight-album deal with The Stone Roses later that year.

Though they had gained some traction with the singles “Elephant Stone” and “Made of Stone”, it wasn’t until the release of their seminal album “The Stone Roses” that cemented their positions as pioneers of the Madchester genre. Full of fantastic melodies reminiscent of neo-psychedelia and chiming guitars, with Brown’s beautifully written lyrics of arrogance and longing, the album sold four million copies worldwide. Although it was slightly ignored in the first stages of release, in later years The Stone Roses was quickly revered as one of the greatest albums of all time.

The Stone Roses contributed towards the burgeoning rave culture at that time, particularly centred in their hometown of Manchester. With the growing popularity of the Haçienda nightclub and other acts such as Happy Mondays and 808 State, the Madchester scene was in full swing, and it became possibly the most prominent of The Stone Roses’ associated genres. Fool’s Gold and Waterfall were frequently heard on the dancefloor, among the acid house anthems and club-oriented pop.

Their scope of influence was inescapable – Reni arguably helped popularise the fishing/bucket hat style synonymous with the era. The band influenced countless other artists, most notably Oasis – Noel Gallagher famously said, “when I heard Sally Cinnamon for the first time, I knew what my destiny was”. The association between both bands might have contributed towards the modern-day indie revival hailing them as being staples of an indie kid’s vinyl collection (regardless of how truly indie you consider them).

The peak of The Stone Roses’ fame might have occured during the so-called Second Summer of Love – spanning over two or three years depending on who you ask – which was an acid-soaked era preaching love, acceptance, and many many drugs. It culminated in their legendary gig at Spike Island, Widnes, which was described as “Woodstock for the E generation”. Despite the following rapid succession of chart hits, The Stone Roses cancelled their upcoming American tour, and issued a statement saying, “America doesn’t deserve us yet”. It would be their last public statement for the next four years.

The Madchester scene began to fade after the other central act, Happy Mondays, split after leading their record label into bankruptcy. Media fascination dwindled: bands that had previously been part of the scene evolved into indie rock or britpop (The Charlatans being notable examples of this). The Stone Roses spent most of 1992-93 travelling in Europe, before starting to work on their second album.

December 1994 saw the release of The Second Coming, to mixed reviews – music journalist Simon Reynolds attributed this to “the resentment that the Roses, divorced from the cultural moment that gave them meaning, were now just another band”. It featured bluesy retro-psychedelic grooves and 70s-style extended guitar riffs, but none of the jangle pop sparkle and cultural drive that preceded it. Following the cancellation of their Glastonbury 1995 performance, and John Squire’s eventual departure in 1996, the band were left with nowhere to go, and dissolved later that year.

These days, you’re more likely to hear The Stone Roses playing in the local nightclub on indie night, than anywhere near a stage. They reformed in 2011 and performed a series of concerts together over the next eight years, before disbanding again in late 2019. But retrospectively they are, more often than not, regarded as one of the greatest British bands ever. In conclusion: The Stone Roses are amazing and their songs are timeless, it’s never gonna be uncool to call them your favourite.